(The following contains language that may well be considered offensive. This post is an attempt to make clear what was written in past Ron Paul newsletters. More information can be found here)

any public expression of Christianity and to make every serious believer fear that he is committing hate crimes by merely thinking thoughts the state disapproves of.

The informal credo of the Interfaith Alliance, expressed at the founding meeting, says the “religious right” is a greater threat to America than “the old threat of Communism.” But since most of these people never thought that Communism was a threat, it is difficult to gauge their opposition to faithful believers.

We do know, however, that it is very strong and very hateful. They will be the hit squad, beloved by the media, that will attempt to destroy any public official who speaks openly about Jesus Christ, the Gospel, or our Christian heritage. They will present themselves as embattled defenders of the lost cause of pluralism, when in fact they represent the attempt to suppress those who disagree with the official political ideology. And they have more friends in high places than the Christian Coalition can ever hope to have.

I’ve also been astonished at how the central government has taken to protecting abortionists from assault, but has never done the same for any other professions (not that we should soil other professions by analogy). The Justice Department is using the Florida murders as an excuse to smear all Christians and suggest they are potentially violent and need to be marginalized.

The New York Times has suggested that conservative organizations that tolerate speakers who believe that abortion is murder, and that abortionists ought to be tried and, if found guilty, subject to the death penalty, are called terrorists. The entire thing is ludicrous, and somewhat ineffective: few people, even those on the other side, have the degree of affection for the abortionists that the media attempts to drum up for them.

Successful political counterrevolutions begin with moral reawakenings. That is one reason why I’m so encouraged by the return of chastity as an ideal among young people. They are ignoring every cultural force to the contrary by promising to keep their virginity until marriage.

There is no precedent for the pro-chastity gathering that took place on the Mall in Washington, D.C., last month. Single teenagers and young adults signed 211,163 pledge cards, the most popular reading: “Believing that true love waits, I make a commitment to God, myself, my family, those I date, my future mate, and my future children to be sexually pure until the day I enter marriage.” That’s a beautifully worded statement. Let’s hope it’s only the beginning.

At the recent world AIDS conference in Japan, researchers admitted what I have long told you: there is no prospect of a cure or vaccine for AIDS. For one thing, the virus keeps mutating. A drug that might work today won’t work tomorrow. Researchers also admitted that they had been lying about the incidence of heterosexual AIDS to increase funding for homosexual programs.

Those who don’t commit sodomy, who don’t get a blood transfusion, and who don’t swap needles, are virtually assured of not getting AIDS unless they are deliberately infected by a malicious gay, as was Kimberly Bergalis. Note: more and more patients ask if their physician and dentist are married and have children.

On transfusions: researchers at the Japan conference also admitted that newer strains of the AIDS virus cannot be detected by the screening tests now used by U.S. blood banks. Although they said we shouldn’t worry, because these strains are confined to Africa (ha!), my strong advice is that you deposit your own blood in advance before going into the hospital.

On sharing needles: this is one of the customs among dopers. They use the same needle out of addict solidarity. Sterile syringes would be just as available on the black market as illegal drugs if the demand were there. Addicts want to share needles. Too bad they have to die so expensively at taxpayers’ expense.

In the news recently was the tragic case of an infant getting AIDS from another infant in a hospital. In addition to being further proof that AIDS carriers should not be mixed with regular patients, let alone healthy babies, the disease was apparently transmitted by infected blood. Despite all the government propaganda about hugging and kissing AIDS patients, the virus can enter through a mere break in the skin.

For years and years, coin customers have worried about how gold and silver will be used as money when the chaos comes.

Chaos is indefinable, as my coin manager Burt Blumert points out, but we do have some evidence of what would happen from some long-term customers of Burt’s who are Ukrainians. These are magnificently strong people, and the sons especially appear to have been chiseled out of granite. No wonder they could survive Communism.

Each time they bought gold, it was the Russian five ruble gold coin they wanted. One day, Burt asked them why, since Russians weren’t too popular in the Ukraine. Well, they said, they had bought them in Kiev in the old days. But wasn’t that 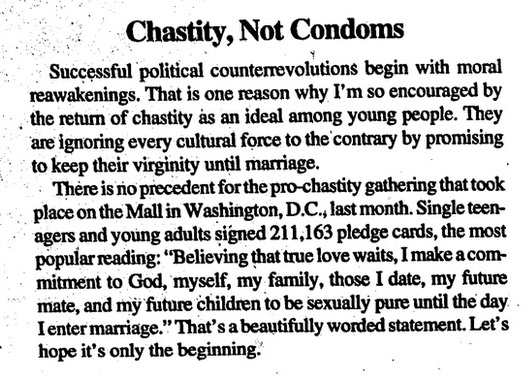 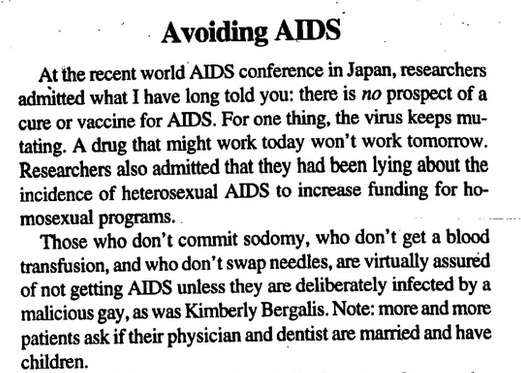 This document is on scribd: “Ron Paul Newsletter September 1994”.

A scan of this newsletter can be found at @RP_Newsletter, “September 1994: The Ron Paul Survival Report”.

On August 19th, 2014 the link to this report was changed from a defunct one at the New Republic to scans at the blog @RP_Newsletter. On August 20th, a link was added to an upload of the document on scribd.